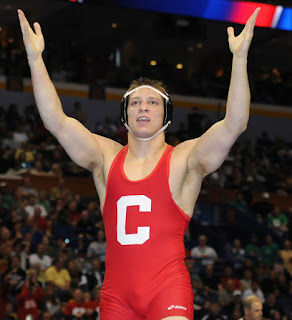 Opportunity is a word that people define in a multitude of ways.  Some people say an opportunity is something that is, figuratively speaking, directly in front of you.  Some people say it is something you can search for.  Some people say an opportunity is the aggregation of a set of circumstances accompanied by the ability to make a conscious decision that would leverage the set of circumstances in one’s favor.  Yada yada yada.  You get the picture.  Although those definitions are valid, that is not how I would define the word opportunity.  To me, opportunity is not a circumstance; it is a perspective.  Yes, opportunities involve circumstances.  Sometimes these circumstances are within our control.  Sometimes we have no control.  Lack of control causes fear to build up inside an individual.  It is human nature.  It is important to not allow the fear of things you cannot control prevent you from taking control of the things that you can control.  For example, in wrestling you cannot control what your opponent does with regard to training and preparation; however, you can control what you do to prepare before squaring off with that particular opponent.
Many people often allow their previously unachieved goals to affect their mentality with regard to creating future opportunities.  This attitude unfortunately is very common, on and off the mat.  And more importantly, the most underestimated problem with regard to past achievements is assuming that one will accomplish more prestigious achievements in the future merely because of past achievements.  In the transition from high school to college wrestling this is extremely common.  Steve Bosak, a 2013 graduate of Cornell University, was a three-time All-American and National Champion in 2012 at 184 pounds.  Steve spent some time with me to share some insights about this very subject. 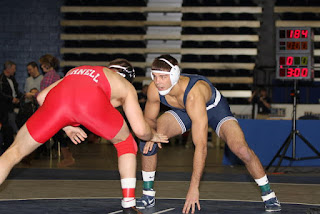 Q:  You never won a state title in high school.  Tell us how that experience of falling short of a state title affected your self-awareness and confidence going into Cornell as a true freshman.

A: Winning a state championship was one of my goals since elementary school. As you can imagine, losing in the finals two years in a row was devastating, but to this day, I believe it made me better in college. I wasn’t satisfied, I didn’t lose confidence, and I became more competitive.

Q:  Tell us about the changes you made between freshman year and your junior year when you took home an NCAA title.

A: There were a number of small changes that made me significantly better in college. Some changes came naturally and others I had to work hard to improve. As with every wrestler transitioning from high school to college, they have to become mentally tougher. This is something I constantly had to focus on. Our coaches ingrained in us the idea that our minds would fail before our bodies and endurance would. I believe that to this day.

Q: What were some of the techniques or skills that you improved upon?

A: During my freshman year, I was limited to shooting low and sweep singles. But if anyone scouted me, they would know to protect their left leg. So the summer after my freshman year, I practiced hitting a knee pull to the opposite leg every day. I’d have individual practices with Damion Hahn (2x NCAA Champion and Cornell Assistant Coach) where I would only hit that shot. I’m pretty sure that Damion dreaded those workouts, but by the time my sophomore year came around, it was my best shot and completely opened up my offense. Guys I competed against didn’t know which leg to protect.

On top, Jeremy Spates (All-American and Cornell Assistant Coach) helped me develop a leg series to compliment my arm bar and tilt series. Again, I would not have been the wrestler I was without Jeremy. If one move wasn’t there, another would be.

Q: Understood.  The key to success in any area is around work ethic and dedication. With that said, there are state champs from all over the US that appear to work hard, but don’t end up reaching the accomplishments that you did in college. What made this possible?

A: In high school I wasn’t as physically mature as some of the guys I competed against. Because of this, I had to overcompensate with technique and specialize on top. Once I reached college, physical maturity was never an issue. I was just as strong if not stronger than everyone else, which made my moves that much more effective.

Q:  Did you ever think about the possibility of not winning an NCAA title at any point between your freshman year and the end of your junior year?

A: No, I always believed I would be a National Champ. My coaches also made me believe it and nothing less. 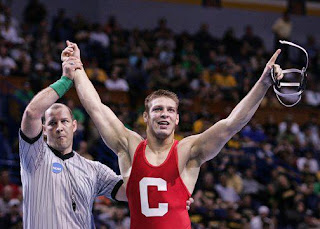 Q:  In your opinion, what is the single most important piece of advice you could give to someone going into college who never won a state title at the high school level and wants to compete for a national title?

A: Surround yourself with motivated and positive people. I was fortunate that one of my best friends, roommates and workout partners was Cam Simaz, who won his title at 197 the same year as me. We both had high expectations and held ourselves accountable.

Q:  I understand you are employed in the Information Technology field, specifically cloud and data center technology.  How has winning an NCAA title contributed to your skills-development mindset in the workplace?

A: Yes, I work for a company named Equinix. I found that many traits carry over from wrestling into the workplace, especially setting goals and working hard to achieve them. The IT industry is constantly changing, and you need to be able to adapt, evolve and continue to develop.

Many people reading this may be asking why we chose to talk with Steve Bosak with regard to the main subject of this article: opportunity.  Why not Kyle Dake?  Why not Logan Stieber?  Well, Steve is a member of a rare group of former Division 1 college wrestlers who ended up winning an NCAA individual title, but never won a state title in high school.  In fact, this feat is so rare that even with all of the extensive research I did before writing this article I could only find a short list of individuals in modern times that have achieved this: Please note, one of more members of this list won more than one NCAA title; however, we only listed the year in which they first became a member of this rare group; also anyone who transferred to a national prep powerhouse in the middle of high school does not count on this list, and we are also not including prep school state champions, as this is a much smaller pool of schools—ie: Ed Ruth, who more than likely would have won a state title in PA if he had stayed at his original high school.

I was shocked to see some of the people on this list, as I am sure most of you reading this article were as well.  To the high school and college wrestlers reading this article:  do not let this list intimidate you.  If you are currently wrestling in Division 1 and never won a state title in high school, do not let this short list deter you from trying to succeed.  Remember the flip side in asking the question of how many Division 1 wrestlers in history that won two or more state titles in high school did not win an NCAA title?  That list, my friends, is much longer than the one listed above.  Just as Steve Bosak would say, you need to believe in yourself to have an opportunity to succeed even if you failed to succeed in the past.  Opportunity is not a circumstance.  It is a perspective.